November 2, 2014
Page 7E
You Never Know
By
Peggy Toney Horton
“You just never know what’s going to happen,” said my friend who’d just received a disappointing diagnosis from her doctor. She had a far-away look in her eyes as if she were trying desperately to figure out what had happened to her.
And why.
Not long after that conversation, she passed away. I’ve thought of her and her remark many times since. It’s true. One can never guess what might happen next year, next week, tomorrow or even in the next moment.
To put it bluntly, life’s a crapshoot!
A young lady we know went to work early one morning feeling fine and happy. She had two wonderful children, several beloved pets, a nice home with all the comforts and a job she loved.
Life was good!
But by eleven a.m., she was in an ambulance, on her way to the hospital screaming in pain! Many hours of testing and eight days in the hospital revealed that she had not one, but two serious conditions that will be with her for the rest of her life. Both conditions will require continuous treatment and the possiblility exists that other serious diseases may spring up from these. Before this incident, she was young and vibrant, but now, both her quality and quantity of life are uncertain, at best.
When I heard about this, my friend’s words echoed in my mind, “You just never know what’s going to happen.”
Similarly, a young man we know was resting on his sofa one Sunday evening, watching TV and feeling fine, but when he tried to get up to get ready for bed, he suddenly felt very ill and it was all he could do to make it to the bedroom and fall onto his bed. There he slept until early morning, when he managed to get up and make an appointment with his doctor. Somehow, he got himself ready and drove to the doctor’s office.
It didn’t take the doctor long to diagnose a leaky heart valve. He immediately sent him to a Cardiologist who ran a barrage of tests and, before the young man knew what was happening, he was scheduled to see a surgeon to discuss how soon open-heart surgery could be done.
After he underwent a seven-hour procedure to replace his mitral heart valve with an artificial valve, he spent ten days in the hospital and months at home recovering.
His life changed drastically!
He had always been extremely active: worked out at a gym three times a week, took long walks, and worked endless hours on his house and in his yard, besides his job. But now, he tired easily and found that he could no longer tolerate the workouts, nor the long walks. Though he tried to work in his yard, it was difficult and he had to stop after short periods and rest or take a nap.
These are only two examples of how uncertain life can be. There are many. Almost everyone you meet has a story to tell about someone whose life was changed in the blink of an eye by something unexpected.
Since, as my friend said, “You just never know what’s going to happen,” perhaps we should stop worrying so much about tomorrow and next week and next year – and learn to live only one day at a time? Because that is all we have.
And that’s a good thing.
If all the days of the future were dumped into our lap at one time, we’d be overwhelmed, wouldn’t we? But God, in His wisdom, broke life up into portions so small that anyone can manage it if we take it as it is given – one day at a time.
Life is filled with unexpected surprises, some treasures, others challenges, but if we approach every situation with absolute faith in God, we’ll find our doubts and worries are short-lived. When change occurs suddenly or dramatically, we have only to remind ourselves that we are never alone. God is with us and within us! While circumstances are temporary, God’s love is eternal and enduring.
And the power of God in us is constant and unchanging.
Peggy Horton lives in Nitro and may be reached at pegylu@suddenlink.net 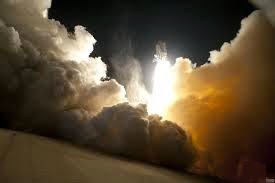 On his death bed, my father looked at the young nurse who was attending him and said, “Do you know the Lord?”
She answered, “Yes sir, I sure do!”
He smiled.
A few moments later, he took his last breath and entered into his eternal home, still wearing the beautiful smile. I can’t say with any degree of certainty, but I’ve heard it said that the expression a person has on his or her face at the moment of transition is the one that remains forever and that no mortician, no matter how creative, can erase it. Supposedly, this makes it easy to tell if the dying person was happy, sad, afraid or disappointed.
Perhaps this sounds a bit far-fetched. But, think about it. Don’t you always come away from a viewing with an opinion about how the dearly departed looked? I suppose the assessments we hear most are, “He looks so natural!” Or, “She looks so peaceful!”
My mother looked particularly beautiful lying on the light-blue taffeta lining of the coffin we chose for her, her silver hair sparkling in the light. Everyone who saw her remarked about the magical talents of the mortician. She had been ill for many months, but there was no indication of illness on this face that looked at least twenty years younger than its actual years. The man she’d been keeping company with for a while said to me, “I always knew your mother was pretty, but I never thought of her as this beautiful!”
Is it possible that, just before death, one sees what lies ahead for him and that determines the look that is fixed on his or her face for all eternity?
There is, it seems, some verification of foresight regarding the destiny of one’s soul:
It is reported that Professor J.H. Huxley, the famous agnostic, as he lay dying, suddenly looked up at some sight invisible to mortal eyes, and after staring a while, whispered, "So it is true."
As he lay near death, D. L. Moody proclaimed, “Earth recedes, Heaven opens before me. If this is death, it is sweet! There is no valley here. God is calling me, and I must go."
“I shall be with Christ, and that is enough,” said renowned chemical scientist, Michael Faraday when his wife asked him, on his deathbed, “Have you ever pondered what your occupation will be in the next life?”
Winston Churchill, the man whose vision and battle cry was to “never give up,”
said on his death bed, “I am convinced that there is no hope.”
Thomas Hobbes, the atheist, said, “I am taking a fearful leap into the dark.”
Catherine Booth, wife of the founder of the Salvation Army, cried out, “The waters are rising, but I am not sinking.”
And George MacDonald, the English novelist, said, “I came from God, and I’m going back to God, and I won’t have any gaps of death in the middle of my life.”
Even with these and many more reported testimonials, there are some who still don’t believe in Heaven or hell.
No one can prove unequivocally that there is a Heaven or a hell. Nor can anyone prove there isn't. The evidence, however, confirms that there are both. Yet it is our own personal decision, by our own free will, to examine and either accept or reject the evidence.
The best validation we have is from Jesus Christ and God's Word. Speaking about Heaven,  Jesus said, “Do not let your hearts be troubled. In my Father’s house there are many mansions. If it were not so, I would have told you, for I go to prepare a place for you. If I go and prepare a place for you, I will come again and receive you to Myself, that where I am, you may be also.” (John 14:2-3)
God's invitation to Heaven is open to everyone. It’s simple. If we believe, we have nothing to lose and everything to gain. But if we don’t believe, we have everything to lose and nothing to gain.  It’s our choice.
"Whosoever will may come."