Is Laughter The Best Medicine 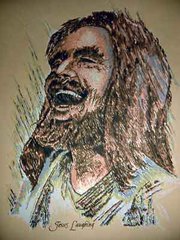 I was sitting on the sofa almost in tears over some perceived wrong done to me when I noticed my cat acting strangely. Taking a closer look, I saw that she was playing with a large rubber band that had been dropped on the floor. She’d pick it up with her teeth, throw it in the air and pounce on it just as it hit the floor, then, with first one paw and then the other; she’d bat it around a bit before starting all over again. Her antics were amusing and I laughed aloud, almost forgetting what had upset me. It’s odd that, no matter how troubled we are, we feel better – at least for a while – when we laugh.

Laughter is a wonderful sensation. There is strong evidence that it can actually improve health and help fight disease. There is also medical proof that laughter is a great workout for the lungs and heart and good for combating stress. Furthermore, laughter is contagious, so if you bring more laughter into your life, you are likely to help others around you laugh more, and realize health benefits as well.

I wondered – did Jesus laugh? If so, what made Him laugh? Research disclosed several accounts of Jesus laughing, but one story tells it best. With the permission of Rev. Sam Trumbore, I pass it on.

This story begins in one of the towns of Galilee, the area where Jesus did much of his ministry. In this town lived a boy named Ethan, about ten years old. Ethan looked much older than his age, for he had lived far beyond his years. You see, the boy was an orphan. His father had been killed by a drunken centurion and his mother had died in childbirth. He had no other family in the area and no one would take him in because his family was from Samaria and the townsfolk looked down on Samarians. Finding no help, he began living on the street.

Ethan slept at night in a manger in exchange for carrying water for the animals to drink first thing in the morning. Each day he visited the farmers in town to see if they had any work to be done in the fields. The workday began at sunup and finished just after sundown. He was paid just enough to buy a small loaf of bread, which kept him from starving. Because he could save no money or food from day to day, he worked every day - or didn’t eat at all. Fortunately, Ethan was blessed with a sharp mind. Without it, he surely would have perished.

The town was on a road to Jerusalem, and Rabbis occasionally stopped to spend the night. Often, the townsfolk gathered to hear the Rabbi talk. Ethan enjoyed hearing them debate points of law expounding great principles and ideas. He tried to figure out the answer to a question put to the Rabbi before the Rabbi spoke. Ethan loved the stories they told to inspire people's faith that God would not forget them and someday would lift them up and send the Romans packing. This gave Ethan hope that someday he, too, might have a home, his own cow, and a small plot of land to grow vegetables when the Romans were gone.

One evening, when Ethan was returning from tilling the barley crop, he noticed a new Rabbi was in town. The crowd which gathered around him was much larger than normal and some gentiles, or non-Jews, were part of the group. Ethan asked a woman on the outer edge of the crowd who the Rabbi was and she shushed him, "Shhhh, he is Jesus of Nazareth."

Ethan pressed into the crowd so he could see and hear. As fate would have it, he pushed up against a Roman soldier. The Centurion looked down at the Samaritan boy and gave him a fast hard kick shouting, "Get away, you little scum!"

The Rabbi Jesus stopped talking, and looked around. "What scum wishes to come and sit at my feet?" he said. "Open the way for the little scum!"

The crowd became silent as they looked to see who Jesus was talking about. This was Ethan's chance. Rubbing his sore rear end, he dove into the crowd, wiggling and jiggling until he was at Jesus' feet. Jesus smiled and asked the boy to sit next to him.

This stirred up the crowd because everyone knew he was a Samaritan and that the boy was unclean (in more ways than one). The most obvious way was the sores on his skin. The local religious know-it-alls who had been debating Rabbi Jesus brought this to his attention by saying, "Rabbi, you defile yourself by sitting with this unclean child. Send him away."

All eyes were now on Rabbi Jesus to see what he would say or do next. Again the Rabbi smiled and said, "We will see if this child is really clean or unclean by asking him three questions."

The crowd murmured in curiosity. What would the Rabbi ask that would show this defiled child to be clean? The evidence, the sores on his skin, was right in front of their eyes!

Jesus asked his first question, "Boy, who are your mother and father?"

Ethan, enjoying the center of attention, replied, "Rabbi, I have no father or mother; they are both dead. No one has taken me in; I am from Samaria. So now my mother is the earth, which gives my body rest as I sleep on her at night, and my father is the sky which guides me as I walk home from the fields at night."

Noises of surprise rippled through the crowd. They didn’t realize the boy they often kicked out of their way could speak such words.

Jesus, looking straight into Ethan's eyes, asked his second question, "Boy, by what do you gain your daily bread?"

Ethan straightened up proudly, "I earn my bread by working in the fields each day. When I have no work, I only eat by the generosity of those who offer me bread in the street. If I can buy no bread and none is given to me in the street, the bread I eat is the hope that someday I shall have my own land to grow grain to make my own bread. This bread of hope sustains me until my next meal."

Jesus, without a trace of emotion, asked his third question, "Boy, what sustains your spirit?"

Ethan thought for a moment and then answered, "Since I must labor from before the sun rises till late in the evening, I have no time or money to practice the rituals and ceremonies of any religion. My spirit is often weary. What restores me is seeing the birds fly high in the sky, watching the tiny barley seeds sprouting up out of the ground reaching for the sun, enjoying the pinks and oranges and purples of a sunset, feeling the friendliness of the animals with which I sleep, and hearing the Rabbis tell of the good days to come when God will triumph over evil. Even though I am a homeless orphan, I know there is beauty and kindness and generosity in this world. This sustains my spirit."

Everyone was silent. Then Jesus began to laugh. He laughed so hard his whole body shook. This wasn't the ordinary kind of laugh when someone slips on a banana peel, or when someone says something foolish. It was a kind of laughter that makes you feel all warm inside. It was the kind of laughter that, when you heard it, you couldn't help but laugh as well. Soon the whole crowd was falling over in laughter. When everyone quieted down, Jesus smiled at the boy and said, "Everyone here thought you were unclean, but the beauty of your words shows a heart of great purity; it is what comes out of our mouth that reveals us, not our outer appearance."

From that day forward, the boy found favor in that community. He was taken in by the man and wife who owned the stable in which he slept and eventually inherited their land, as the couple was childless. He never forgot the kindness of Rabbi Jesus and told this story many times, hoping it would be told many years to come. You may pass it on as well.

Strange as it may seem, after Ethan met Rabbi Jesus, his sores disappeared. If you asked me why, I'd have to shrug my shoulders and say I don't know. What I do know is that magical things happen when a child is given love, attention and respect.