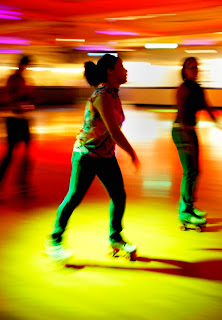 In the summer of my sixteenth year, my best friend, Carol, and I spent most of our time together. We took long barefoot walks, went to Saturday matinees at the local movie theater, and had sleepovers – spending most of the night talking and giggling – but our favorite thing to do that summer was go to the roller rink.
It was common at that time, for roller rinks to have side walls that were opened to the outside on warm evenings allowing passers-by to enjoy the sights and sounds inside. As lively organ music blared, my best friend and I whirled around and around the wooden floor holding hands. Sometimes, the lights would be turned down low and a kaleidoscope of colors would dance all around us while a soft melody played. They called this a “couples” selection and it was the last skate of the evening. Almost always, a boy would ask me to skate with him. Carol was asked, too. It was so exciting!
One night, I noticed a good-looking boy standing on the outside looking in. He had curly brown hair, cut short, and twinkling eyes that smiled even when his lips didn’t. As he watched me skate, his broad grin exposed perfect white teeth. At first, I tried to ignore him, but soon felt self-conscious and burst into laughter. He laughed, too. Shortly, he came inside and swaggered around the floor that surrounded the skating area – still watching me.
This boy was dressed in a most unusual fashion, even for that time. He wore pink pants, a pink and white checked shirt and white buck shoes. Carol took one look, poked me in the ribs and said, “Look, Maggie!”  I said, “I am looking.” She said, “Isn’t he cute?” Making a face, I said, “Can’t you pick ‘em better than that?”
I was not at all impressed with this boy and his peculiar clothes or his superior attitude, but Carol was taken with him!
However, when the last skate was finished and we sat down to take our skates off, he came over to me and started a conversation. “Hi,” he said. “Where do you live?”
“96th St,” I said. “Where do you go to school?” he asked.
“I go to Peyton High,” I answered. He looked surprised and said, “Well so do I. How come I’ve never seen you there?”
“I just transferred from Bingham last year. I’ll be a senior this year.”
“Me, too,” he said. “What’s your name?”
“Maggie,” I said. He smiled and said, “I’m Ken. I live on the West Side. I still don’t understand why I never saw you before in a whole school year.”
“Don’t know,” I said, picking up my skates and heading for the door… with Carol close behind.
“Hey,” Ken said. “Can I call you?”
Before I could answer, he handed me a small piece of paper and said, “Just write your number on this.”
I don’t know why I did it, but I wrote my number on the paper and then complained to Carol all the way home that I shouldn’t have because he just wasn’t “my type.”
He called – the very next day. When he asked if I’d go to a movie with him on Saturday night, I said, “Yes.” What’s wrong with me? I thought. I don’t even like this guy. He thinks too much of himself. Hope he doesn’t wear that pink outfit again.
That was the first of many dates. And with each date, I found myself liking him more. School started and we had a great senior year! We went to football games, movies, and spent as much time together as possible. The holidays came and we enjoyed them together, too, doing all the fun things young folks do at that festive time of year. Spring soon arrived and so did Prom time. How special that night was! I in a beautiful long gown wearing the corsage he’d given me and he in a tux, sporting a red rosebud boutonniere on his white jacket. Those happy days passed much too quickly, although we didn’t realize it at the time. To us, it meant we were almost adults. Finally, the big day came and we had a lovely graduation. We cherish the wonderful memories of that last year of high school together!
Suddenly, it was summer again. My parents were planning my future; his parents were doing the same for him. Little did they know that we had other plans. One day in early September, while my parents were at work, we eloped.
That was many years ago and we’re still spending all our special times together - along with our children, and grandchildren.
Just think - it all started with a pair of pink pants, white buck shoes and a winning smile!


This story appears in my book, Somewhere in Heaven My Mother is Smiling

"Ah, how quickly the hands on the clock circle toward the future we thought was far away! And how soon we become our mothers."— Peggy Toney Horton