The Lure Of The River~

A friend recently sent me an old photograph of a young girl standing on a small boat. She looks to be about twelve or thirteen years old. She exudes confidence with the jaunty tilt of her head and one hand perched on her hip. I can’t seem to put this picture out of my sight or out of my mind.  After two days, it continues to haunt me. 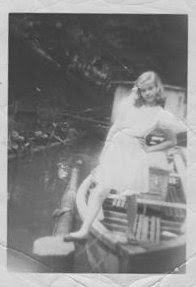 You see, the girl in the picture is me, and this old black and white, creased photo has evoked bittersweet memories from more than half a century ago. One in particular.
From the age of seven until my late teens, I lived in a house by the river. A dozen or so rickety wooden steps and a narrow path led to the river’s edge, where there was a dock with a couple of rowboats and a small houseboat tied to it. One of the boats was used as a ferry for taking passengers to the other side. There was also a long, log, moss-covered raft secured there.
My parents gave me strict orders, on the day we moved there, to stay away from the river, especially when they were at work. Unbeknownst to me, they had enlisted neighbors to report to them if I was seen breaking the rules.
But I was drawn to the river like a hobo to a freight train!  Every chance I got, I headed down the rickety steps and narrow path, and jumped onto the deck of the houseboat.  I often took a friend with me.  We’d sit on the edge of the deck dangling our bare feet in the cool, green water.  It was especially fun when a paddleboat passed, sending wave after wave crashing against the boat, making it rock back and forth… splashing us as we giggled excitedly.
Too often, while sitting on the boat with my back to the shore, I’d hear a familiar whistle. Turning my head, I’d spot my dad’s striking figure at the top of the hill, his expression conveying—in no uncertain terms—that I was in a heap of trouble.  Reluctantly, I’d follow him home for my punishment.  Sometimes, I would be grounded for days. Other times, the peach tree switch, which I had to cut myself, was applied.


But punishment worked for only a short time. When I thought I had my parents’ schedules down pat and could slip away to my favorite place without being caught, I was on my way again. Occasionally, I’d pick an apple from a nearby tree and munch on it while dangling my feet in the water. Life was good!
Sometimes I got away with it.
One day I arrived at the river and the houseboat was gone. I looked in all directions but it was nowhere to be seen. Disappointed, but not to be outdone, I decided to approach unfamiliar territory…the log raft.
Barefoot, I stepped cautiously from the pier to the raft and realized at once that it was very slippery… and slimy!
“Oh my gosh”, I thought.  “I have to go back”. Turning quickly, I lost my footing and slid off the raft into the murky water. I couldn’t swim!
I didn’t think it was deep this close to shore, but trying to touch bottom proved me wrong. I went under water, bounced back up, sputtering, and trying to grab the raft, but my hands kept sliding off. I went under again…and again… and back up…clutching at the slippery raft repeatedly.  I was so tired….
Panic stricken, I thought, “It’s cold…and dark…I’m drowning!”
Suddenly I felt a swift tug on my head..…Whoosh!  I was out of the water, lying on the slimy raft. Coughing and sputtering, I looked up into the scowling face of Mr. Taylor, a neighbor who ran the ferryboat. He said, “You okay, girl?” Fighting back tears, I nodded.
“What are you doing down here anyway?” Without waiting for my answer, he lifted me to the pier and said, “You git on home now and don’t come back, you hear?”
I ran all the way home. Luckily, my parents weren’t there, but I knew it was just a matter of time until they would be, and I was dreading the sting of a peach tree switch on my bare legs. I got out of my wet clothes and waited for the inevitable. When my parents arrived, I listened fearfully for the ring of the telephone or a knock at the door, but neither came.
Days passed… and then weeks… but to my happy surprise, Mr. Taylor never told my parents about the incident. Perhaps he thought that such a frightening experience was punishment enough.
I sure did!
I’d like to say I learned my lesson and never went back to the river, but I did, many times—even as a teenager. The only thing that changed was the gender of the friends I took with me—but that’s a whole other story!
This story also appears in my book, Somewhere in Heaven My Mother is Smiling~