When my mother passed away, at 85 years old, I inherited her house… and her tiny Maltese dog, Jeffy, who was not housebroken. Lucky me! I had just lost a dog of my own and vowed I would never get another. But what could I do, having promised my mother in a weak moment that I would take care of Jeffy if she predeceased him?

Well... there was a Plan B. Since I couldn’t live in two houses at once, and it was going to take a lot of sweat and money to get hers into shape to sell, my son, Lee, who had always loved the old home place, said he’d move in and fix it up… letting Jeffy live out his years in the home he was used to. He said, “All I ask is that you take him for periodic grooming and veterinary appointments.” 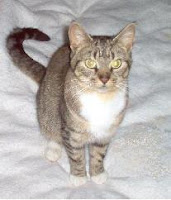 What could be better than that?
The drawback: Lee had a cat. Miss Bits was a large tabby cat with a reputation for being mean… actually, down right dangerous! Furthermore, she had not been declawed and I was concerned for Jeffy’s safety.
But there were no alternatives. My husband was not happy about the prospect of a dog that was not housebroken coming to live with us. So I decided to take Lee up on his offer with the understanding that, if it didn’t work out, I would make other arrangements for Jeffy. Lee and Miss Bits moved in with Jeffy.
It didn’t take Miss Bits long to learn that, besides not being very bright, Jeffy had another deficiency. He could not climb stairs. So when Jeffy, who thought he was king of the hill, tried to do his duty and chase Miss Bits—as any self-respecting dog would do—she’d merely let him pursue her for a while, and then go up to about the third step leading to the second floor, sit down and look back at him triumphantly. Jeffy, looking puzzled,  would sit there barking and panting until he got so tired that he’d give up and lie down to rest. This became an everyday game.
Lee had to go to work each morning but felt quite certain that, while he was gone, they got along fine, because he once came in unexpectedly and found them in the kitchen eating together. It seemed that the “evening chase” was just for his benefit. Happily for me, it seemed this arrangement was going to work out after all.
Fulfilling my part of the bargain, I took Jeffy for his first grooming. My mother had not been well for over a year and his appearance had been neglected. Maltese have long, thick hair that must be brushed daily to keep them from getting matted. Jeffy was very matted. The groomer took one look and said, “I think the best thing we can do for Jeffy is to cut his coat short—a puppy cut!”
“I don’t know,”  I said. “My mother never wanted him cut short.”
The groomer smiled. “Since it’s summertime,”she said, “it’s a good time to do it. If you keep it in good shape as it grows, it’ll be all grown out again by cold weather.”
It was a good argument and I reluctantly agreed, knowing my mother would er have permitted it. When I picked him up, he was barely recognizable, but looked adorable with his short haircut. From the way he pranced around, it seemed he also felt much better. 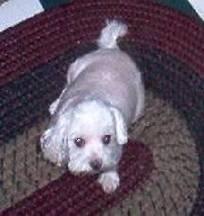 Now there were just a couple more problems. Lee suspected that Jeffy had worms, as well as infected ears! A trip to the veterinarian was in order. I called the vet’s office and asked if I could bring a stool sample in, without the dog.  They said, "Yes." So Lee collected the sample and left it in a baggie for me to pick up. I also took an old, nearly empty tube of ear medication hoping they’d refill it for me.
The vet’s assistant took the sample to check, but she said, “As far as the ears are concerned, the doctor says that, because it’s been a while since he’s seen Jeffy, he’d rather not prescribe medication without seeing him.”
“Oh,” I said. “Guess you’d better make an appointment then.”
The only time she had any time soon was 4:10 that afternoon and it was now only 2:30. I said, “That would put me in major traffic going home later.” I lived about ten miles away and the evening traffic was dreadful.
“But,” I added, “since I’m already here... I suppose I should stay until it’s all done?”  So I made the appointment and went back to 's to wait.
To pass the time, I had a conversation with Jeffy, then Miss Bits, listened to music, and walked the floor while talking to my husband on the phone until almost four. When it was finally time to go, Jeffy flatly refused! I had no idea it would be such an ordeal getting him to go with me. I put him down on the porch to lock the door, and when I tried to pick him up, he lay down and scooted backward until he was under the porch railing. I thought he was going to fall off the porch, but no amount of coaxing would make him get up.
Trying to balance my open purse, keys, and a bottle of Dr. Pepper while attempting to pick him up, I dropped the Dr. Pepper, and things started falling out of my purse. Angry words spewed from my mouth and I was embarrassed when I realized we were entertaining several neighbors. I finally put everything down, recovered Jeffy,  then slowly picked it all back up and headed for the car.  Somehow, I got the door unlocked and got in while angrily shouting at Jeffy—“BAD DOG!"
He whined the whole twenty minutes we had to wait in the waiting room. A boxer growled at him, a cat hissed at him and a large blonde woman tried to make nice conversation with me. I didn't feel like it, and was glad when someone said, "Mrs. Toney?"  (My mother’s name was still on the records.)
I didn't bother to explain that I wasn't Mrs. Toney. It was easier to just go with it. The doctor checked Jeffy’s ears to find that they were indeed badly infected. He put the first drops in while instructing me, “I want you to do this twice a day for ten days.” I nodded. “The worm test was negative,” he said. At last, something for which to be thankful! I thought.
Arriving at Lee’s, I was grateful to find him home. I took Jeffy  in, gave Lee a full report, the eardrops, and left, still hoping to beat the heavy traffic. But I didn’t. It was an exhausting trip… and to make matters worse, I felt guilty about losing my patience with the little dog. I promised myself I’d never do that again.
That was Jeffy’s last trip to the vet. On a Saturday morning, several weeks later, my phone rang. When I answered, Lee said shakily, “I have bad news.”
“What is it?” I said… unable to hide my dread.
“Jeffy died in his sleep last night.
“Oh, no! What happened?”
“Not sure,” said. “Perhaps it was a seizure. He didn’t suffer; just one little cry, some shaking and he was gone.”
“I’m so sorry,” I said. “But don’t feel too bad. You gave him a good home.”
“Yes,” he said, “but it still hurts.”
Lee buried Jeffy in his back yard that afternoon. Although our hearts were aching, we consoled each other with reminders that our joint efforts had given this little orphaned doggie a pretty good life considering all the dreadful things that might have happened to him otherwise.
Somewhere in Heaven, my mother is smiling.


This story also appears in my book, Somewhere in Heaven My Mother is Smiling.
Posted by Peggy~ at 1:17 PM 5 comments:

It's A Joy To Have Friends 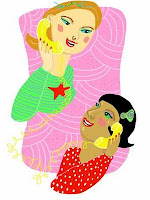 Sunday, July 11, 2010~﻿
Recently, I was pleasantly surprised to hear from two friends that I haven’t seen or talked to for many years.  How nice it was to reconnect with them after such a long time!

I enjoyed a lengthy phone conversation with each of them. Having experienced similar changes over the years, we had a lot of catching up to do. Besides growing older ourselves, our children have grown up, married and blessed us with grandchildren – some of whom are now adults. Admitting our advanced ages, we compared ailments, meds, healthy diets, and physical fitness programs – finally agreeing that retirement is the best thing about getting older. And sadly, each of my friends related how devastating it had been losing her husband to an untimely death.

After hanging up from the most recent chat, I sat thinking of the good times the two of us had shared years ago, the secrets we’d tucked away, and especially, the way we’d laughed. Every time we were together, we found something that made us giggle like school girls. Our friendship was like that – fun!
There were sad times, too – the occasional problem with one of our children, family illness, the death of a loved one – all of the things that are difficult to face any time, but doubly so without a friend by your side.  Thankfully, true friendship withstands both good and bad times.

So why do we lose touch?  When we like some people so much, why do we let years slip by with no contact?
As I pondered this, I thought about something I read a few years ago, written by a young lady from the UK named Jessica Smith.  It made a lasting impact on me. Some excerpts follow:
Life is like a train ride.
We get on. We ride. We get off. We get back on and ride some more. When we are born and we first board the train, we meet people whom we think will be with us for the entire journey. Those people are our parents!
Sadly, this is far from the truth.
Our parents are with us for only as long as we absolutely need them. They too have journeys they must complete. We live on with the memories of their love, and guidance... their ever presence.
There are others who board the train who eventually become very important to us.  These people are our brothers, sisters, friends and acquaintances, whom we will learn to love, and cherish.
Some people on the train will leave an everlasting impression when they get off.  Others will get on and get off the train so quickly, they will scarcely leave a sign that they ever traveled with you.
Remember, at any moment during our journey, any one of our travel companions can have a weak moment and be in need of our help.  We, too, may need someone we can count on to be supportive and understanding.
The biggest mystery of our journey is that we don’t know when our last stop will come. Neither do we know when our travel companions will make their last stop. Not even those sitting in the seat next to us.
We’re all on this train ride together. Above all, we should strive to make the ride as pleasant and memorable as we can, right up until we each make the final stop and leave the train for the last time.
The old friends that recently came back into my life are only a small sample of those that have traveled on the train with me, but these two, in particular, left an everlasting impression when they got off.  I’m glad they got back on – and delighted that they've been a part of my train ride!

This story also appears in my book, Somewhere in Heaven My Mother is Smiling~