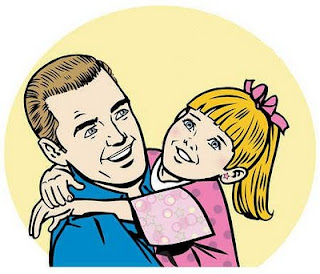 I jumped off the train steps and the conductor handed my suitcase down to Mother, who was waiting for me. I wasn’t ready to come home. Kingston was the only place in the world I could go barefoot all summer, climb mountains, and run around in a summer rain shower in my underwear if I wanted to.

It was so much fun when Aunt Betty, Cousin Sue and I climbed from the rock wall out back of my grandmother’s house onto a peach tree limb so we could walk over to the roof of the house. I don’t know what all the fuss was about when the whole family came running out of the house yelling at us, “Girls, girls, get down from there right now!” We thought it would be fun to get on the roof.
“Heck, I won’t have any fun here,” I thought, as Mother opened the front gate. “Daddy won’t be home from the power plant until midnight. Mother will make me take a bath, shampoo my hair and go to bed before then.”
I loved my daddy!
Sometimes, when my best friend, Carol, and I went to the movies on Saturday, and they showed those awful newsreels about the war, I watched Japanese planes crash onto one of our ships killing American men and I worried so about my daddy! When I had nightmares about those newsreels and woke up crying, Mother said I should be grateful that my daddy had a good job at the power plant because, since he was doing something as important as making electricity, he wouldn’t have to go to war.


I was awake early.  Mother had already gone to work. The sun was shining and I heard Daddy in the kitchen singing… “Precious Memories, how they linger...”
Running into the kitchen, I squealed, “Daddy!” He turned, flashed a big smile, ran toward me and hugged me tight. “How’s my sweetheart?” he said.  Without waiting for an answer, he said, “What do you want for breakfast?”
“I don’t care.”
He gave me bacon, eggs and toast. I started eating and he started singing again.
When I was finished, I got dressed and called my friend, Carol.
“What cha’ doin’?
“Nuthin. What’re you doin’?”
“Nuthin. Wanna go for a walk?”
“Sure, but I have to eat first.  C’mon down.”
Mrs. Lewis always wanted me to eat with Carol, who was a picky eater. I’d eat even when I wasn’t hungry because it seemed to please her.
Our walks always ended at the river. There was a small houseboat docked there and we’d sit on the deck, dangling our feet in the cool, green water.  Sometimes a paddleboat passed, sending wave after wave crashing against the boat, making it rock back and forth… splashing us as we giggled excitedly.
As we sat munching juicy red apples from a nearby tree, Carol told me about the summer she’d had while I was at Kingston. She’d gone to the beach, got a beautiful tan and met a boy named Emil who had promised to write to her. We were just beginning to pay attention to boys, and it was fun to talk about them, though we were still too young to date. Once, when we were at the carnival that always came to our town in August, a boy I’d just met, stopped me in the house of mirrors and put his arms around me, but I pulled away and ran.
I told Carol about my summer, too… but she couldn’t understand why I enjoyed climbing mountains and picking blackberries; or why playing games and roasting potatoes in an open fire on the creek bank at night was so much fun. She knew nothing about the excitement of going to the Company Store or the admiration one feels watching weary miners with black faces trudge home from work in the evening.
Some things are hard to share—even with your best friend.

This story appears in my book, Somewhere in Heaven My Mother is Smiling.